FORGING THE ALLIANCE AND SETTING THE FOUNDATION
At the end of the 1999-2000 season, Cwmtillery AFC and Abertillery Town forged an alliance, playing under the club name Tillery FC until the close of the 2006 season. The decision to combine the neighbouring clubs, who were both steeped in their individual and respective history, was considered to be the only viable option to preserve the medium to the long-term future of competitive football in the town, whilst also providing a platform for youth team players to progress to senior league status within their own club.

The amalgamation, and subsequent name change, provided the club opportunity of attracting several major sponsors, helping to provide a firm financial base which along with the correct structure in place both at a club/committee and management/playing level, afforded potential to progress within football in future years.

Tillery FC underwent a name change and revamp at the beginning of the 2005-2006 season, officially becoming Abertillery Excelsiors FC. This was a conscious decision to provide the club with a unique identity and also a geographical location for any visiting clubs, officials and fans, effectively allowing them to ‘find us on the map’. 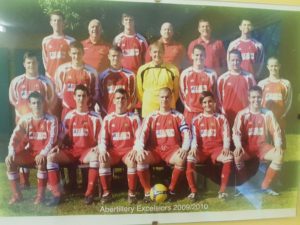 EXCELLING AGAINST RUGBY AND THE JOURNEY TO WELSH LEAGUE
The return of the ‘Excelsiors’ name will have certainly been welcomed by older players and members of the club, who may have remembered the great successes of local team Cwmtillery Excelsiors during the 1940s. Unfortunately, as the post-war years ushered the beginning of 1950 local preference for sport had changed and rugby became the predominant sport in the town. The egg-shaped ball would have dominance so much so that the area wouldn’t have it’s own football team until 1965, when Albert Padfield would step in. An ex-player of the 1940s team, Padfield is credited as single-handedly kickstarting the football club back into action with an Under-11s side. 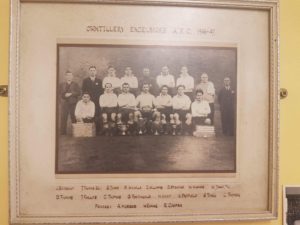 The nucleus of this junior team went on to graduate to senior football during the 1970s, initially playing in the North Gwent and West Gwent Leagues, where they eventually gained promotion to the Monmouthshire Senior League. By the 1987 season, Cwmtillery had battled and progressed to the First Division of the Gwent County League and despite finally winning the league championship at the conclusion of the 1993-1994 season, a lack of facilities at the Woodland Field would stonewall the club and deny them entry to Welsh League. However, a twist of fate would prove in the club’s best interest in 1999-2000, when the club finally entered the Welsh League system when Spencer Youth declined the automatic promotion place. 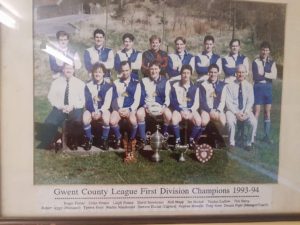 ABERTILLERY TOWN – THE HIDDEN HISTORY IN ENGLISH FOOTBALL
Records show that Abertillery Town was formed prior to 1910 and in that year registered themselves as a limited company along with Risca AFC. In the early years, the club played in the South Wales League before moving to the old Southern League in the 1913-1914 season, where they locked horns with teams such as Brentford, Luton and Stoke City. They would remain there for another ten years until 1923, when they decided to relinquish their membership and returned to football in Wales. The club also won the Senior Cup competition of the 1919-1920 season, applying to join the Football League the following year only to fail election in the ensuing ballot, at the expense of Charlton Athletic, despite receiving more votes than Bury.

Abertillery Town continued to play Welsh League football as Abertillery Town or Abertillery Athletic up until the late 1950s, before finally disbanding. However, in 1982 the club was reformed by Bryan Boots, Kelvin Watkins and Robert Legge.

WHERE TO NOW?
The club we now know as Abertillery Excelsiors play their football in the Gwent County League, boasting three adult teams, a veteran side and a successful youth set-up. The aspiration of the club? To return to Welsh League football and continue writing more in the club’s storied and eclectic journey.